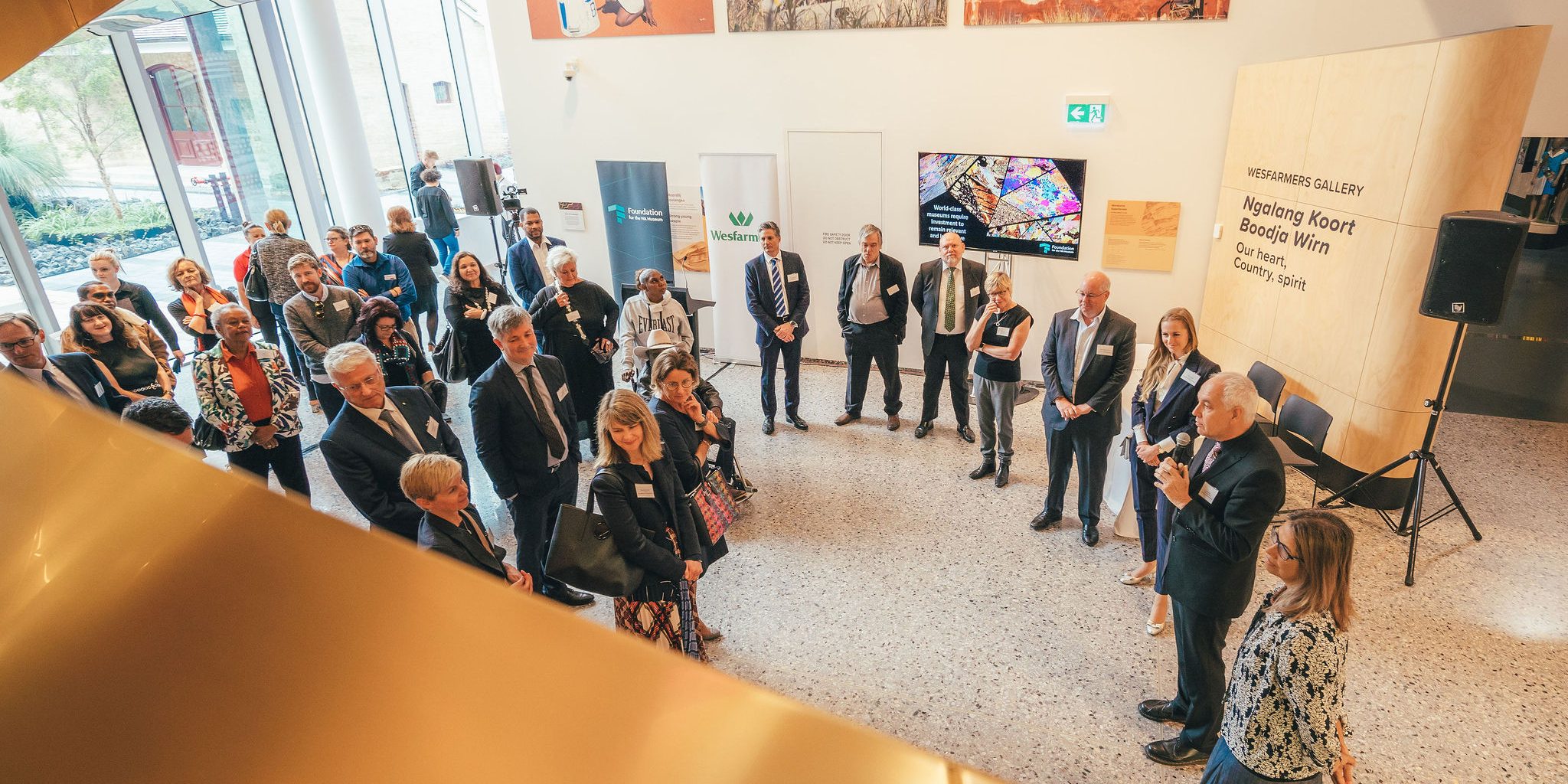 The Foundation for the WA Museum proudly announced today that Wesfarmers will be one of the Founding Partners of the new Western Australian Museum, Boola Bardip.

Wesfarmers has signed a ten-year agreement with the Foundation as Naming Rights partner of the Ngalang Koort Boodja Wirn Gallery (which means Our Heart, Country and Spirit in Nyoongar language).

The partnership supports and enriches the cultural, scientific and educational capacity of the Museum through the Foundation’s Discovery Endowment Fund and will deliver The Wesfarmers International Lecture Series. Created and produced by the Foundation for the WA Museum, the Wesfarmers International Lecture Series will feature a diverse range of eminent guest speakers from around the world, commencing in early 2022.

Ngalang Koort Boodja Wirn is one of eight permanent exhibitions in the new Museum.  It is located on the ground level of the Museum, the first exhibition visitors can experience. It showcases cultural materials, multimedia and audio experiences from Aboriginal and Torres Strait Islander peoples from around Western Australia.  More than 60 language groups are represented in this vibrant space.

The exhibition honours traditional knowledge systems, protocols and ways of communication. It is an acknowledgement of the endurance, survival and strength of all Aboriginal peoples.

The gallery includes a Yarning Circle which has been designed for story sharing and features a Magabala Reading Hutch for multigenerational story sharing from which visitors will have views of many gallery features including the vast Seven Sisters night sky projection.

There will also be a Contemplation Zone which is a specially designed area to allow for reflection and cultural safety. It is situated at the exit of a series of hard history stories and will contain soothing audio, the scent of balga and a semi-enclosed theatre space for approximately 15 people designed for viewings, talks and programming. This area will feature a strong and diverse program of short films from across Western Australia reflective of the gallery stories and themes.

Also featured in the Ngalang Koort Boodja Wirn Gallery will be an educational public program targeted at primary school classes (Years 1-6).  The program connects with the WA Curriculum Aboriginal history and culture and offers professional learning programs for teachers and educators.

Wesfarmers Chairman Michael Chaney said “Western Australia’s new museum is one of the most significant public building projects in the State’s history and brings a world-class contemporary museum to Perth. We see the museum as a once in a century opportunity to support greater knowledge and understanding of the history, culture, education and environment of a State we have called home for more than 100 years and others have called home for tens of thousands of years.  We are delighted to be supporting this wonderful new phase in the life of the museum that will enable it to exponentially expand its community outreach and engagement across education, Aboriginal cultural programming and associated research and publishing.”

Foundation for the WA Museum Chair Nev Power responded “On behalf of the Foundation for the WA Museum, it gives me enormous pride to welcome Wesfarmers as Founding Partner of WA Museum Boola Bardip and Naming Rights Sponsor of the Ngalang Koort Boodja Wirn Gallery.  Their prominence in Western Australian culture and commerce positions them perfectly to champion the story-telling of history and philosophies of Aboriginal and Torres Strait Islander people which unfolds in the Gallery and I applaud them for making this significant contribution through WA Museum Boola Bardip to Western Australian society and Indigenous education.

“Their commitment to excellence and education continues with The Wesfarmers International Lecture Series, created and managed by the Foundation.  Commencing in 2022 the Series will welcome high-profile guest speakers from around the world putting the spotlight on Perth.”

FOUNDATION FOR THE WA MUSEUM:

The Foundation for the WA Museum has been committed to securing the future of Western Australia’s cultural heritage since 1995. Their role is to cultivate and develop relationships with individuals, organisations, and community groups who understand the critical role that museums play in society, education and history and assist in delivering engaging community and educational programs, support ground-breaking scientific research and discovery, source funding for touring exhibitions and acquire new items for the State Collection, beyond the State Government’s funding.

FOUNDATION FOR THE WA MUSEUM: