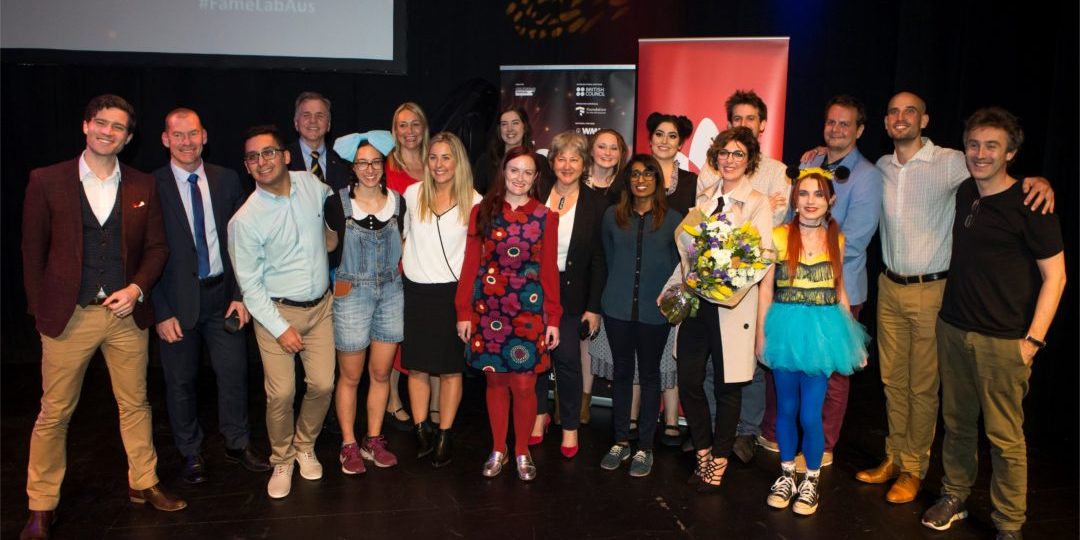 Dr Paola Magni from Murdoch University has been announced as FameLab National Final Winner and Audience Choice for 2019.

Paola will represent Australia at the International FameLab Competition at the Cheltenham Science Festival in June, competing against scientists from 25 countries.

FameLab is the world’s leading science communication competition to find and mentor young STEM researchers to share their stories with the world.

Winning over the judges and the audience at the National Final, Paola dived into the world of underwater crime investigation, asking how do you reconstruct the events of crime and identify the culprit when water washes the evidence away?

Paola’s research is finding revolutionary tools for underwater investigation, bringing new witnesses to life – ‘colonising’ plants, animals and little creatures like the barnacle. The presence and activity of these organisms can help investigators reconstruct and identify how long a body has been in water and track the location of the crime scene.

This research has global application as it can be key to investigate criminal cases – using science for justice and closure for families.

Paola will represent Australia at the international FameLab competition at the Cheltenham Science Festival in June, competing against scientists from around 25 countries.

“It’s a huge privilege to be able to represent Australia at the international FameLab competition. We have world class scientists and science communicators in this country and being able to share the wonder of science with people is an amazing experience,” said Paola

FameLab is the British Council’s international science communication competition and Australia is one of 25 participating countries. It is a training program in a competition format to get people talking about science, technology, engineering and maths (STEM).

Applicants have three minutes to present a concept from their field of study to a panel of judges. The judges look for somebody who can shine in content, clarity and charisma – it has to be scientifically accurate, clear to understand and presented with a lot of personality.

“We are thrilled that Paola Magni will bring Australian forensic innovation to a global stage in June. For over a decade the British Council has supported thousands of STEM researchers around the world, promoting international collaboration in higher education and science, and giving audiences the chance to hear about new discoveries that could change our lives.” said Helen Salmon, Director British Council in Australia. “For the last two years the Australian winners of FameLab have gone on to be Global Runners-Up in the International Competition. We will be following Paola’s journey at the Cheltenham Science Festival next month as she shows off her brilliant work which is helping bring justice and closure to many.”

Jenny Allen, CEO, Foundation for the WA Museum was thrilled with the standard of creativity, research projects and presentation skills. “FameLab is unique in that it fosters serious and important scientific work introducing it to the world in a fun and informal way. The winner, Dr Paola Magni, is in a position to make a real impact on forensic investigations of the future – we can all be proud that this initiative was created in Perth, by a woman, who will now represent Australia against the rest of the world.  I would like to personally congratulate Paola, along with Runner-Up Hayley and the rest of the finalists – they are the future of science.”

Dr Paola Magni is a forensic biologist with key focus on the application of natural sciences to crime scene investigation. She is a researcher and lecturer in forensic science, with experience as an expert witness on cases of homicide, suspicious death, animal/wildlife cruelty and food forensics. Paola is an author of papers in international scientific journals, has written chapters in forensic books and is the editor of a forensic entomology book. She is also the developer of “SmartInsects”, the App designed to facilitate police and pathologists at crime scenes. Guest speaker in talk shows about science and investigation, she has played an intrinsic role as screenplay consultant for the Italian version of the TV series “CSI”. TEDx speaker, advocate of STEM and WISE.

The British Council is the UK’s international organisation for cultural relations and educational opportunities. We work with over 100 countries in the fields of arts and culture, English language, education, and civil society. Last year we reached over 65 million people directly and 731 million people overall including online, broadcasts and publications. We make a positive contribution to the countries we work with – changing lives by creating opportunities, building connections and engendering trust.

The Foundation for the WA Museum

The Foundation for the Western Australian Museum is the producer for FameLab Australia. The Foundation has been committed to securing the future of our State’s heritage since 1995. Our role is to cultivate and develop relationships with individuals, organisations, and community groups who understand the critical role that museums play in society to create a thriving WA Museum. We assist in delivering engaging community and educational programs, support ground-breaking scientific research and discovery, source funding for touring exhibitions, and acquire new items for our State’s collection.

WINNER Dr Paola Magni, Murdoch University – Crimes, Critters & Clues. A crime scene investigator’s job is to reconstruct the events of crime and identify the culprit, where insects, crustaceans, molluscs, microorganisms and plants were the first witnesses!

RUNNER-UP Hayley Teasdale, University of Canberra – The ball to prevent falls. Find out how a piece of handheld technology is delivering real time spatial information helping in the rehabilitation of Parkinson’s disease symptoms.

Amanda Tauber, Bond University – Slamming the breaks on metastatic cancer. In metastasis, cancer cells break away from where they first formed travel through the blood or lymph system. New research in medicinal chemistry is looking to slow the growth of these cells to improve our ability to tackle the disease.

Thimo Ruethers, James Cook University – The deadly danger of crocs on the plate. How do we tackle the problem of fish allergies with thousands of different fish varieties, and what can eating crocodiles or other reptiles teach us?

Catriona Nguyen-Robertson, The Doherty Institute, University of Melbourne – Exercise can take your immune system for a ride. We all know exercise is good for us…or that’s what we think. New research is tracks immune cells after exercise to look for changes in their function, making sure we don’t push our immune system to the point where it cannot cope.

Dr Dwan Price, Deakin University – Nuts and guts. Nationally, 3.9 million Australians avoid foods due to allergy and intolerances. Researching the effects that peanut allergens have on gut leakiness and the routes peanut allergens take to cross the intestine could help people suffering from peanut intolerances.

Sathana Dushyanthen, University of Melbourne – The double-edged sword. Cancer is a constant battle between good versus evil. Certain immune cells possess the ability to penetrate into tumours locating these call villains. A new drug is out to attack and destroy.

Samuel Bladwell, University of New South Wales – A new spin on electronics. What does watching Rafael Nadal smash a topspin forehand at the Australian open have in common with the spin of the electron and fundamental quantum mechanical properties?

Dilan Seckiner, University of Technology Sydney – Forensic gait analysis: morphometric body assessment with associated CCTV image quantification. Surveillance cameras are become an important tool for minimising crime, but what if you can recognise a face? New research uses footage to analyse a person’s gait for identification.

Hossein Tavassoli, University of New South Wales and Swinburne University – Mending the broken hearts using micro and nanotechnology. Understanding the interactions of different cells in the heart can provide insights into the development of new methods of heart repair through the use of 3D-printing and microfabrication technology.

Rebecca Wellard, Curtin University – Eavesdropping on killer whales. The transient and mobile nature of killer whales makes them difficult to study by traditional method. Using passive acoustic monitoring to focus on how different killer whales sound and what makes them unique – a way to eavesdrop on the ocean’s secrets!

Kit Prendergast, Curtin University – Flowers to keep the native bees buzzing. Investigating native bees in the ‘burbs’ of the biodiversity hot-spot of southwest WA. How do we protect native bees?

Etienne Rastoin-Laplane, Curtin University – What’s fishy about the Galapagos? Underwater video footage analysed to provide the crucial insights needed to bring about the long-awaited changes in the fisheries management of the Galapagos Marine Reserve. Ensuring long term conservation and avoiding the pitfalls of an iconic tourist destination.

Thank you to our valued FameLab Australia Partners