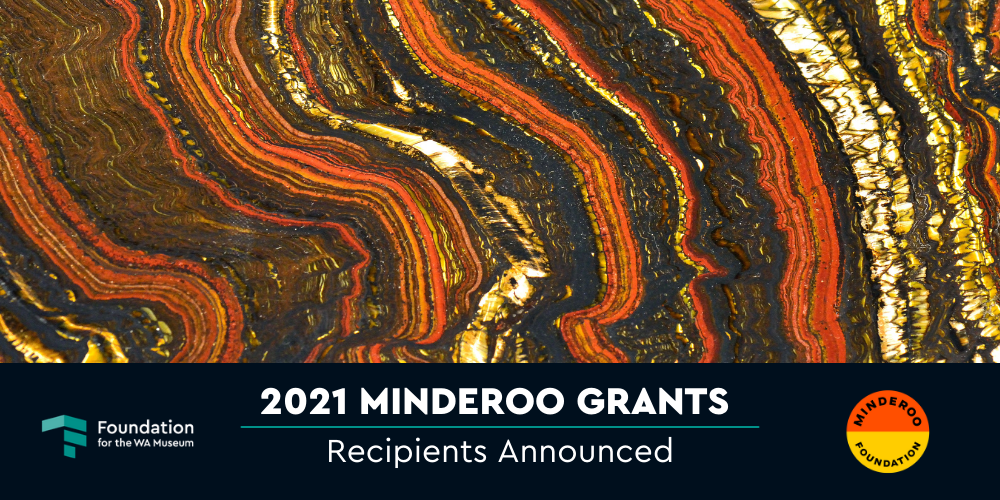 The Foundation for the WA Museum are proud to announce the successful recipients of its 2021 Minderoo Grants.

The Museum of the Goldfields are going to establish an Aboriginal Bush Food and Medicine Garden because Western Australia is home to thousands of edible and medicinal native plants; and bush food has sustained generations of traditional Australians who today represent a rich and vibrant history in our country’s culture.

The educational garden will be used to preserve and share important Indigenous knowledge about edible and medicinal properties and uses of many different plants, whilst showcasing how powerful our own ‘backyard’ really is.

The WA Museum’s History Department are going to make one of the first attempts to undertake a large contemporary collecting project related to the Wooroloo bushfires and Cyclone Seroja.

These disasters are of state significance because they resulted in devastating change in the lives of individuals and whole communities in multiple parts of Western Australia. A ‘people-first’ approach will be used in exploring the experiences to give communities a platform to tell their stories.

An exciting multi-disciplinary collaboration between Terrestrial Zoology, Aquatic Zoology and Earth and Planetary Sciences, this project is going to explore, discover, and share with the community the fossils of land snails and several mammals from the Nullarbor Plain.

The excavation of the fossils will provide the WA Museum Boola Bardip with new research opportunities and specimens to exhibit, whilst revealing new insights into the biology of extinct species and ancient habitat information.

This is an outreach opportunity which is going to promote the sharing of digital assets obtained on a recent expedition to the Houtman Abrolhos Islands by Dr Zoe Richards.

The WA Museum are going to investigate the wreck site of the Trial, which is still contentious and lacking evidence. They will also search for the eventual wreck site of the SS Koombana, which was lost with all hands in 1912 and has not been seen since.

This project will have a particular focus on commissioning an aerial magnetometer survey of the two remote sites in question, with a view to identifying possible targets for a more detailed in situ investigation.

The Foundation’s Minderoo Grants, funded from the Discovery Endowment Fund, generated a great response from the WA Museum staff with eight high-calibre submissions received from a wide cross section of museum disciplines.

As a result of the outstanding quality of the applications received, the Foundation has increased the Minderoo Grants funding capacity in 2021 to enable the full support of the chosen five projects which would not otherwise be funded.

The Minderoo Grants support the WA Museum Boola Bardip’s proud reputation as a leader in Western Australian environmental research, and social and cultural history. Drawing on our State’s remarkable geology, anthropological history, and unique biodiversity; the Minderoo Grants assist the museum to expand the knowledge of WA’s environment and peoples, helping the State to plan, and contribute to WA’s global research reputation.

Congratulations to all the 2021 recipients.