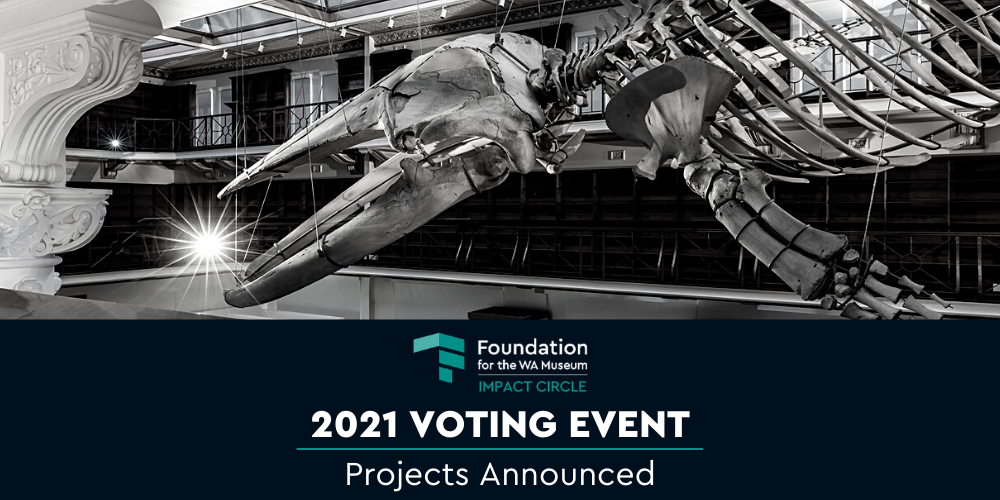 The Foundation for the WA Museum are pleased to showcase the five projects that will feature at the inaugural Impact Circle Voting event later this year.

A collaboration between the WA Museum’s regions and the Science/Collections departments, this project will support the Gwoonwardu Mia Gascoyne Aboriginal Heritage and Cultural Centre to develop a legacy education program.

This project is a rare opportunity for two experts to join forces and create content that links both Indigenous knowledge and scientific research around the unique species.

This project aims to bring the Aboriginal history of the Albany and Great Southern region to life.

The Menang Mia Mia installation will be a unique example of public art and a permanent representation of a traditional Aboriginal dwelling at the Museum of the Great Southern. It will also be used as a meeting place, an educational storytelling tool and a representation of the first people of Albany on the point where European settlement in WA occurred.

Funding is sought to complete a feasibility study as the first stage of this project.

The Museum owns the last remaining ‘Perth Parlour Coach’, a type of hybrid bus/taxi designed and built in Western Australia in the 1930s for the Perth to Fremantle route.

The vehicle has been partially restored, with work to date completed as a collaboration between the Museum and volunteers from the Bus Preservation Society of Western Australia (BPSWA) at Whiteman Park.

Funding is sought to complete the restoration of the vehicle to allow it to be used as a static display and during community-based vintage car events.

This project aims to add value to the visitor experience in the WA Down Under Gallery at the WA Maritime Museum.

The WA Down Under Gallery invites visitors to learn about incredible marine life that can be found along WA’s coastline, as well as be immersed in an underwater world, see rare specimens, and discover how local communities can help protect out natural landscapes.

New exhibits and interactive elements will further engage visitors by increasing exploration and connection opportunities with the diverse marine environments in WA.

This project will explore and discover WA’s ancient mammal Megafauna diversity and will share the exploration and discoveries with the community through the recovery of several near complete and very rare Diprotodon skeletons.

It is proposed that school students will be involved during both the fieldwork stage, and in learning activities at WA Museum Boola Bardip through the utilisation of one of the recovered fossil skeletons.