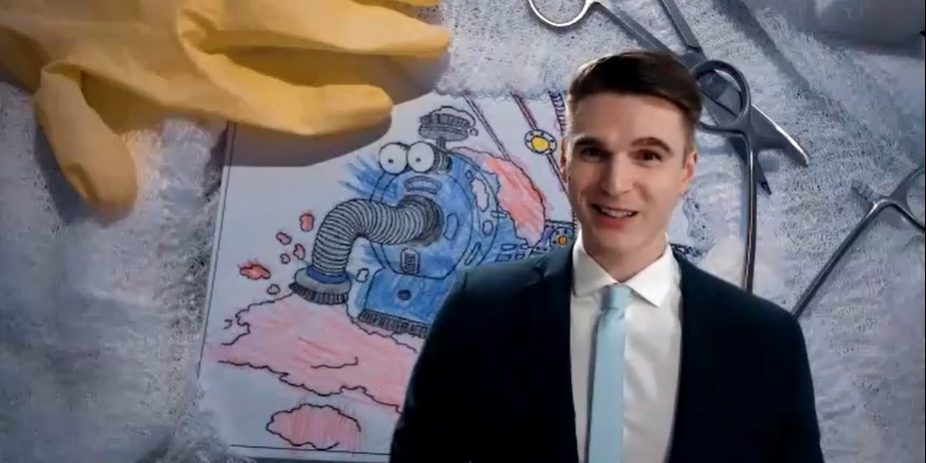 The FameLab Zoom Stage delivers the power of healing ….

Australian winner Cody Frear to compete in the UK final

Winning over the judges and the audience at the National Final, Cody’s winning presentation ‘Out with the old, in with the Noo-Noo’ was a creative analogy using the Teletubbies vacuum cleaner character Noo-Noo, to explain how paediatric burn injuries can heal faster and reduce scarring using a ‘vacuum’.

Mr Frear’s research at the Centre for Children’s Burns & Trauma Research Centre stems from an interest in clinical science, developed after spending some time volunteering at a HIV/AIDS clinic in The Gambia.

Cody will represent Australia at the international FameLab competition at the Cheltenham Science Festival in the UK, competing against scientists from around 25 countries.

“It was a privilege to participate as a young science communicator and to be part of the next generation. It is so important in these times, that as we make progress in science, we equally can communicate those gains to the community. It is only through communication that science gains its power and provides public benefit. It was a pleasure to share the zoom stage with the other finalists. I have watched them all. I learnt so much from their presentations as well,” said Cody.

Performing in their lounge rooms, instead of a packed auditorium, the contestants had just three minutes to present, using no slide deck or scientific jargon to fall back on. Instead, they used their creativity, humour and inventive brains to get their messages across. The judges look for somebody who can shine in content, clarity and charisma – it has to be scientifically accurate, clear to understand and presented with a lot of personality.

“In the scientific world we certainly need to recognise excellence in communication. It has become more and more obvious with COVID-19 the number of researchers around the world working together. I believe FameLab personifies the enormous role to be played by research in guiding and implementing solutions, like those presented by the winner, Cody.” said Jenny Allen CEO, The Foundation for the Western Australian Museum.

“Public health, climate change and artificial intelligence are all now central to public discourse, and science communication is key to helping us navigate this rapidly changing world. FameLab has gone from strength to strength in Australia over the past five years, growing rapidly and reaching an engaged audience. We’re particularly proud of Australia’s strong track record at an international level, with the past four winners of the Australian competition making it to the Cheltenham Festival International FameLab Final and two landing the Global Runner Up Award. As we have seen with the bushfires and Covid-19, building our capacity to interpret and engage the public with science is crucial.” said Helen Salmon, Director British Council in Australia.

Thank you to our valued partners.